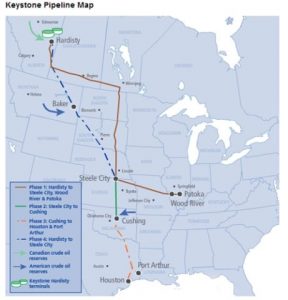 Sacramento, CA — Congressman Jeff Denham is disapointed with the President’s decision to deny the application for construction of the Keystone XL Pipeline.

The Keystone XL pipeline was a 1,700-mile, $7 billion TransCanada project that would bring 700,000 barrels of tar-sands oil per day from Alberta, Canada, to refineries on the Gulf Coast. It would extend a pipeline that became operational in June 2010 and already carries crude oil from Alberta to Illinois and Oklahoma.

Most labor unions support the project. But several environmental groups made defeating the pipeline a top priority. They are concerned about the carbon emissions and water used to process the oil sands, possible pipeline leaks and they argue the project will create fewer than 5,000 jobs.

Denham states “It would have created 20,000 jobs immediately; spurred the creation of 118,000 spin-off jobs, and reduced our dependence on Middle Eastern oil.”