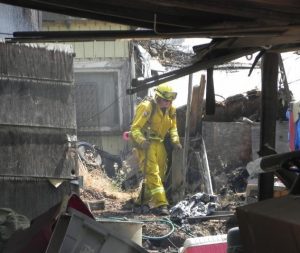 Sonora, CA — Officials contained a fire that started in a junk pile a couple blocks off Mono Way along Cameron Way. The property owner Louis Feitas says he has lived there 50 years but is moving out. Feitas says he hired some help to pick up various scrap metal. He explained to CAL Fire officials on scene, ten minutes after his hired help left, he noticed smoke and began to put it out with a hose. Part of the hose melted and Feitas noted, “It got away from me real quick.”

As for the cause, Feitas said that he does not smoke but wondered if one of the workers could have left a cigarette. Feitas expects to fill several dumpsters with material and other junk that has collected on the property and noted the structure on the property will be demolished.

The fire burned a fence between Feitas and his neighbor. There was visible damage to the back door of the neighbor’s garage. Traffic on Mono Way was not significantly impacted.