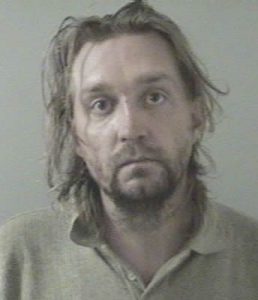 Placerville, CA — As the search for Leila Fowler’s killer continues, Calaveras County officials have taken interest in an arrest that occurred yesterday in Placerville.

42-year-old Jason Wayrynen was taken into custody after allegedly walking into a Placerville apartment and trying to kidnap a one-year-old child. The Placerville Police Department reports that a woman was outside and Wayrynen followed her, uninvited, into her apartment. He forcibly took away her 15 month-old child, and held the child on the ground. The mother fought back and was able to reclaim the child.

The mother and child dashed over to a bedroom, and held the door shut while the intruder tried to come inside. Law enforcement was notified and quickly captured Wayrynen.

Wayrynen’s last known address was in Camino, and he reportedly did not know the victim. The information was transferred to Calaveras officials because there are some similarities in the description of Leila Fowler’s killer. The Calaveras County Sheriff’s Office has stated that the suspect is believed to be a white or Hispanic male, with longer gray hair, six foot tall, muscular build, and was last seen wearing a black long sleeved shirt and blue pants.

“We have been in contact with the Placerville Police Department and are investigating this particular aspect of the case,” says Sgt. Chris Hewitt, Calaveras County Sheriff’s Office Spokesperson. “We have asked them to collect a DNA sample from their suspect. The sample will be forwarded to the Department of Justice Crime Lab for comparison purposes.”

There is no immediate evidence tying Wayrynen to the Calaveras County incident. Placerville is approximately 44 miles from Valley Springs.