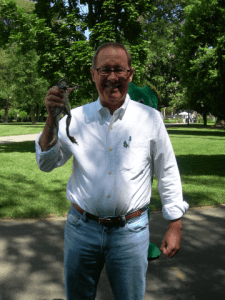 A traditional event designed to promote the upcoming Calaveras County Fair and Jumping Frog Jubilee played out Tuesday at the state capitol.

The 39th annual Capitol Frog Jump was hosted this year by Senator Tom Berryhill. Around 35 people took part in the jump, including Senators such as Berryhill and Ted Gaines. Members of the Assembly included Ken Cooley, Marc Levine, Cheryl Brown and Norma Torres.

“This is my first year representing citizens from Calaveras as Senator, and let me tell you, frog jumping is not for the faint of heart,” said Berryhill. “My Dad, Clare Berryhill, represented the area back in 1969 and 1970, and I have found memories of the fair. But today, watching the capitol community come together for a good old fashioned competition was just plain fun.”