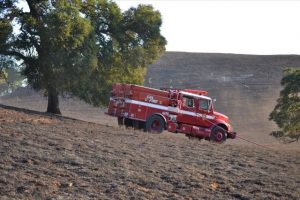 Cal Fire reports fires in the state are up over 45 percent this year. They caution residents to be prepared this summer as we could have a dangerous wildfire season due to a dry winter.


Cal Fire Spokesperson Nancy Longmore says, “We are about six weeks ahead of where we normally are at this time of year in terms of the moisture and in the vegetation. They are really being stressed for moisture which will translate into them being more flammable earlier in the season than normal.”

Longmore says fire crews are already seeing wildfires up in the higher elevations. In the state there have been more than 680 wildfires since the beginning of the year, about 200 more than average for the period. In Calaveras and Tuolumne counties, the numbers are bucking the state trend.

Longmore says, “For 2013 we are actually a little bit down from the number of fires we had last year at this time. That’s good news and we want that trend to continue. So we need people to be really conscious of what they are doing outdoors. Whether it’s debris burning, welding, cutting their grass, chain sawing or weed eating because we would like to keep those numbers down.”

Here is a breakdown of the numbers for Calaveras and Tuolumne County from January to April.

The Department of Water Resources final survey found the snowpack is just 52 percent of average statewide. Longmore warns, “People really, really need to being taking care of their defensible space this year more than ever. The grass is drying out quickly and that heightens the risk of sparking a fire.”

• Maintain 100 feet of Defensible Space
• Remove all dead plants, grass, and weeds 30 feet of your home
• Trim trees 6 feet from the ground
• Remove all leaves, pine needles and debris from roofs
• Create an Evacuation Plan in case of a wildfire