Trees Not To Plant 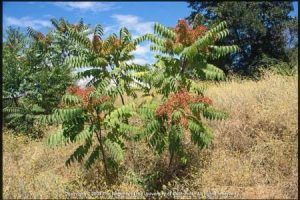 When planting a tree, we imagine it growing tall, spreading its branches, and beautifying our yards for years to come. Perhaps we even envision birds serenading from within its branches.

But some trees, while lovely elsewhere, do not grow well in the Mother Lode. For a tree to live up to hopes and expectations, choose a tree that will grow healthy and strong while complementing both your yard and our surroundings. Here are six trees not to plant:

The TREE OF HEAVEN (Ailanthus altissima) is the poster child for disruptive trees, bullying itself into wild spaces and gardens. In the 19th century, its prolific seeds were used for packaging; leaking packing cases scattered seeds helter-skelter along the way. Due to the tree’s rapid growth, other specimens were intentionally planted. It now invades our hillsides, elbowing out native plants throughout wild spaces and back yards.

Don’t give this tyrant an inch lest it quickly rule your neighborhood. Remove mature trees plus suckers and seedlings as soon as they appear.

The EMPRESS TREE (Paulownia tomentosa) is glowingly advertised. Add water and it “zooms to a flowering, scented, shade tree in just one season!!!” crow the headlines. If you’re thinking this is too good to be true, you are right.

The empress tree’s leaves and long, slender seed pods are suggestive of a catalpa tree in appearance, but it better resembles the tree of heaven with aggressive roots that can come back after cutting, fire, and even bulldozing.

The LEYLAND CYPRESS (Cupressocyparis leylandii) is another fast grower but with limited life expectancy due to its susceptibility to a host of insects and disease. It is especially vulnerable to cypress canker, a fungal disease that girdles and kills limbs and eventually invades the entire tree. Unfortunately Leyland cypress is often grown as a screen with several trees planted together, which in time are all destined to become disfigured and to decline.

It’s hard to beat the graceful beauty of the EUROPEAN WHITE BIRCH (Betula pendula), a weeping tree with eye-catching pale, peeling bark. But think twice! All birches require copious water and many are short-lived in our blistering summers. The European white birch is especially vulnerable to the nearly invincible bronze birch borer. Wet, sappy patches on the bark and dying limbs usually spell doom.

While our native REDWOOD trees are coveted by Mother Lode gardeners, redwoods in the Foothills are iffy. The coast redwood (Sequoia sempervirens) with soft, feathery-looking needles has grown for millions of years near the Pacific coast where cool, moist ocean air keeps the trees continually damp. Fog precipitates on branches, dropping to and moistening the root zone during drought. And, it is impossible to duplicate the soils of the coast redwood’s long-established forest floor.

The other redwood, giant sequoia (Sequoiadendron giganteum), has scaly, somewhat prickly foliage. Native to the western Sierra, it tolerates greater cold, and once established, is more drought tolerant than the coast redwood. But, a fungal disease typically causes dieback when water stressed or grown away from its native habitat.

The LOCUST (Robinia) is a handsome, drought-tolerant flowering tree with brittle wood and invasive roots that sucker and spread with abandon. To make matters worse, its roots may inhibit growth of nearby plants. The black locust (Robinia pseudoacacia) is exceptionally invasive but some of its hybrids, such as the popular Purple Robe, are commonly available in nurseries. To reduce their spread, use drip water and plant well away from other ornamentals.

For help choosing a tree for your yard, visit http://selectree.calpoly.edu/. For information about control of invasive trees, consult “Woody Weed Invaders,”
http://www.ipm.ucdavis.edu/PMG/PESTNOTES/pn74142.html#content or call the Master Gardener Hotline at 533-5912.

Vera Strader is a Master Gardener who carefully researches all new trees before planting them in her yard.