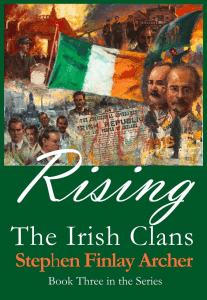 Book cover for The Rising by Stephen Finlay Archer

Stephen Finlay Archer, an Angels Camp resident of Irish ancestry, is three novels deep into a six-book series called The Irish Clans. Originally intended as a single tome about Dublin’s Easter Rising with nods to his own clan’s roots, the story has spun into a full-blown historical saga that interweaves adventure and romantic subplots.

Archer and his wife Kathy spent years traveling during the course of his story research. Although the books are set in the time period of the Irish Revolution from 1915 to 1923, his characters include Ireland-born spread across two continents. Searching for their heritage, they discover historical ties to each other in the process along with clues to clan treasures buried by their ancestors. His first book launched on St. Patrick’s Day 2016 in Ireland at Dublin’s historic Temple Bar, which featured it in its retail store.

On Sunday St. Patrick’s Day at Manzanita Arts Emporium (MAE) in downtown Angels Camp, Archer will officially unveil his third in the series. Aptly entitled The Rising, the story centers around the culmination and aftermath of the actual Easter Rising: the martyrdom in Dublin that resulted in the revolution that allowed the Irish to break away from Britain in the early 1900s.

Sharing the inspiration for his novels, Archer confides, “I am doing this in part because of the value of our history and the moral content of people who are fighting for freedom and justice. I think it is something that we need to think about more in our society.”

MAE is the home of Manzanita Writers Press, the publisher of Archer’s books. The book release and signing will run from 3 to 5 p.m. Archer is also presenting a talk on the Irish in America. The event is free and open to the public although seating is limited. Archer adds that there will be refreshments befitting the occasion. For more information, click here.