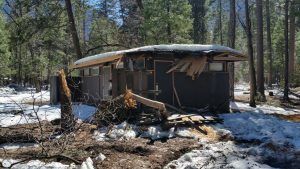 Park spokesperson Jamie Richards advises that visitors should anticipate delayed openings, including the installation of the Half Dome cables, the Mariposa Grove Visitor Shuttle, and access to the Mariposa Grove parking areas. The lottery permit date for the cables was already moved back, as reported here. Richards acknowledges this could shorten the number of days for climbing the cables, but adds that it is too early to tell. Additionally, the park’s primary Concessioner, Yosemite Hospitality, expects to open later than usual, as well. Click here for the latest information regarding concessioner delays.

To demonstrate just how hard hit the park was by the recent significant storm systems that triggered temporary road closures, debris slides and falling trees, Richards also pointed to the March 1st snow survey that measured both the Merced and Tuolumne River drainages at nearly 143 percent of normal. Those factors resulted in extensive damage or destruction to park facilities mainly from falling trees. As reported here in February, cabins, tents, campground restrooms, campsites, parking areas, hiking trails, roads and utilities systems were all impacted.

While plowing will begin in April on Glacier Point and Tioga Roads, neither road is anticipated to reopen before Memorial Day, which is typically the targeted date. Richards also caution that the spring will bring major snowmelt and in turn higher water levels in river and streams resulting in cold and swift-moving currents creating potential hazards for park visitors. All visitors are reminded to take special precautions around water, especially around stream-crossings.

Richard notes that crews are currently assessing the areas they can get into and repair work will begin as soon as possible, but adds that at this time no time frame is available for reopening.