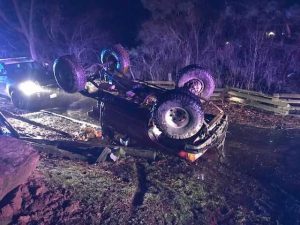 Crash site where Miller was arrested

Just last night, Tuolumne County Sheriff’s Deputies and Sonora Police Officers pursued a motorcycle until the driver lost control and wrecked on Bonanza Road near Snell Street in Sonora. The rider, 35-year-old Kristoffer Carpenter of Sonora, tried to run from the scene, but did not get far before he was caught. Originally, Carpenter had failed to stop when being pulled over for not having a license plate on his bike. A records check showed he had a suspended license and a field sobriety test determined he was driving under the influence, according to sheriff’s spokesperson Sgt. Andrea Benson. Carpenter faces DUI, evading and driving with a suspended license.

The other incident began when a truck, going the wrong way on a one-way street, almost hit a patrol vehicle in downtown Sonora around 11 p.m. recently. A deputy was forced to slam on his brakes to avoid a collision with the pickup. The driver, 32-year-old Gerald Miller of Tuolumne, then took off and the deputy gave chase. At one point, Miller even rammed his truck into the patrol vehicle, according to Sgt. Benson, who relays that the deputy was not hurt. The pursuit ended when the truck smashed into a boulder on Tuolumne Road North and overturned onto its roof.

A passenger in Miller’s truck was treated for injuries at a local hospital, but his current condition is not known. Miller’s charges include assault with a deadly weapon, vandalism, and driving under the influence of alcohol.