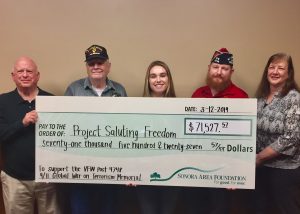 Sonora, CA – Faltering plans for a special veterans memorial are now steaming ahead because of a high school senior, who fired up a fundraising furnace that recently drove the project to its financial goal.

On her lunch break Tuesday, Candace Olsen, who attends Summerville High, appeared at the Sonora Area Foundation offices to present a check for $71,577.57 to the Project Saluting Freedom. Among those on hand to receive the monies were Veterans of Foreign Wars Post 4748 Commander Aaron Rasmussen, an Iraq veteran, and Project Chair Frank Smart, who served during the Vietnam War.

Just over two years ago, the Tuolumne County Supervisors approved plans for the proposed 9/11 Global War on Terrorism Memorial to be located on the east lawn of the Tuolumne Veterans Memorial Hall. By design it is intended to be a multi-use memorial forum for ceremonies and other events; honoring all veterans and those who lost their lives in the 9/11 terrorist attacks, including law enforcement, EMT/medics and firefighters.

An Idea Percolated Over Lunch

Smart recounted that he and Rasmussen came up with idea over lunch one afternoon at Perko’s three years back to honor veterans of the Iraq, Afghanistan and 9/11. “We decided to put the two together because they belong together – one was colored by the other,” Smart explained. Fundraising efforts for the project faltered and raised just over $4,000 towards the original goal of $40,000. The readjusted budget total later rose to $86,000.

Addressing Olsen, Smart emoted, “You saved the project…it was just not moving the way it should move. The brick sales just were not going the way we thought they would, like they did for the last project we did at the VA clinic. It just wasn’t happening – then you came along.”

Olsen shared that after coming up with the idea to support the memorial as part of her senior project last fall, her calendar rapidly filled to the point that every day between December and March listed related activities to do. Besides selling t-shirts, soliciting donations of various amounts from businesses and appearing before community service clubs and other groups, Olsen and her mother Kathleen worked to organize a Feb. 22 community gala at Sonora Opera Hall that netted over $20,000 after expenses. Olsen credited her mom for providing significant assistance with logistics and other support.

“Originally, we thought we only had to raise $40,000,” she confided. As to how that number grew to well over $70,000, she replied, “I think the word just got out there and a lot of the bigger community members that are always there supporting everything…they really just kind of helped out and told their friends — and their friends told their friends – and everything just blew up.”

With regard to lessons learned, she admitted, “I definitely had to get used to public speaking, that was for sure. I had to go out to these local businesses…and learn how to talk to them appropriately and how to…speak to them in more of a business manner instead of as a teenager asking for money.”

Sonora Area Foundation Executive Director Darrell Slocum called Candace a catalyst and credited her ability to share the story of the memorial with the community. He stated, “I think by having Candace bring the project here to set up a fund, that helped. But what is missing…in what she is saying and talking about things blowing up…how did all these people get involved? It is all because of Candace’s effort.”

Mission Complete? Not So Fast

Smart chuckled after hearing Olsen affirm that her senior project was now officially “wrapped.” “One more thing, you will be on the agenda when we dedicate this memorial to get up and talk,” Smart told her. “Well, that will be the last thing,” she agreed. He cracked, “And maybe we will have you lay a few bricks for us!”

With the project nearly 100 percent funded, Smart stated it is tracking forward with plans to break ground in June and perhaps to have the memorial finished in time for a dedication on perhaps 9/11 and/or the following weekend.

As he and Rasmussen see 9/11 as this generation’s Pearl Harbor, they hope it will become a place for school fieldtrips. Designed by landscape architect Michael Wharton, the memorial will feature a brick walkway leading to an elevated platform with a flagpole and stone plaques honoring those who served and lost their lives. It will also house artifacts from the Twin Towers, Pentagon, and Shanksville Museum.

A side project to the memorial is a time capsule that will be onsite for 50 years; instructions left with the Tuolumne County government offices as to its unsealing. The VFW is currently seeking community ideas and input as to the information and items to seal therein. For more details about the memorial and time capsule plans, click here.