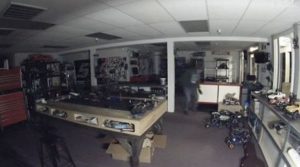 Sonora, CA — A real-time recording of a burglary in progress helped two law enforcement agencies nab a pair of suspects within minutes of their getaway.

Tuolumne County sheriff’s officials recount that the owner of a hobby shop on Mono Way in Sonora received an alert from his surveillance system early Saturday morning that there was movement in his store.

After calling sheriff’s dispatch, the owner provided real time updates as two people rummaged through the premises. As deputies and CHP officers headed to the scene of the crime, the pair took off in a red car reportedly packed with stolen items.

Minutes later, a red Honda Accord appeared on Highway 108 in Sonora. CHP officers and a deputy spotted it and attempted a vehicle stop. The driver refused to yield and subsequently led them on a chase that ended near Springfield and Horseshoe Bend roads, where the driver failed to negotiate a sharp turn and drove into a field.

Officials say that 58-year-old Robert Casper of Oakdale and his passenger, 53-year-old James Cotner of Modesto, were arrested and booked into the Tuolumne County Jail on numerous felony charges and for outstanding arrest warrants. Additionally, about $4,000 worth of stolen property from the store was recovered and returned to the owner.