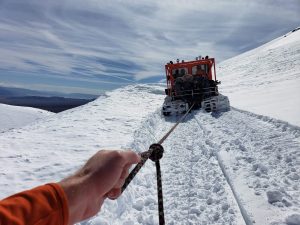 Bridgeport, CA — Officials are searching a multi-county area for a Marine who failed to return from a backcountry skiing trip.

The Inyo County Sheriff’s Office reports that First Lt. Matthew Kraft began trekking the Sierra High Route on February 23 and was scheduled to conclude the trip this past Monday or Tuesday near Bridgeport. His father contacted emergency officials when he failed to return. A multi-agency air and ground search is underway for Kraft. Officials have been facing difficulty accessing the backcountry area out of avalanche concerns following last week’s heavy storm system. In addition to Inyo and Mono counties, a map released shows that the search area also includes parts of Mariposa and Tuolumne counties (Click on the image box).

Military officials note that Kraft is an infantry officer who has received survival training.

A snowcat is being utilized to transport search and rescue teams on the ground, while air resources are being provided by the CHP, Air National Guard and Fresno County Sheriff’s Office.

The Inyo County Sheriff’s Office adds that avalanche debris has been located across the search area.