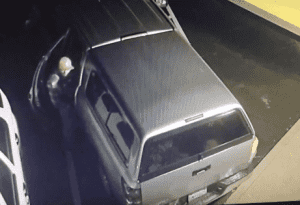 Sonora, CA — A Murphys man was arrested for trying to break into a storage container behind a business in the 100 block of Mono Way in Sonora.

It was caught on video by a surveillance camera that was overhead. The suspect was also seen allegedly trying to siphon gas from nearby parked vehicles. At one point, the police department reports he seemed to spot the video camera, and then decided to try to conceal the license plate on his truck. Later on, 43-year-old Jason Cerutti was identified as the suspect.

Officials learned that he was on probation out of Calaveras County, and was arrested in cooperation with Calaveras County’s Probation Department. He was booked into Tuolumne County Jail.