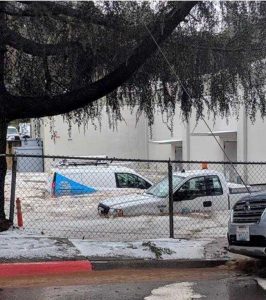 Sonora, CA – Not only were AT&T customers impacted by Wednesday’s downpour, but so was the company’s Sonora building.

Pictures in the image box show work vehicles submerged in water at the company’s Sonora building parking lot located on South Washington and William Street. As reported yesterday, during the heavy rain, service to some AT&T customers, including the 911 lines to the Sonora Police Department and Tuolumne County Sheriff’s Office, went out. The company was able to reroute the calls to the Calaveras County Sheriff’s Dispatch.

Clarke Broadcasting tried to inquire about the service outage and damage to the building by ringing a door bell at the property. When an employee answered, there was visible flooding.  Large fans could also be seen and heard blowing in an attempt to dry out the wet floors. The man declined to comment and directed us to company spokesperson Ryan Oliver. He returned our call this evening and updated, “Service was restored last night for the small number of customers in the Sonora area whose ability to make calls may have been affected by flooding at one of our facilities. Our team worked as quickly as possible to drain the facility and repair any damaged equipment.”

Oliver did not have any update on the number of customers affected, but believes it was a small group and added that the 911 calls were quickly rerouted. Tuolumne County Sheriff’s Officials also reported that the phone systems were back up and running late last night.