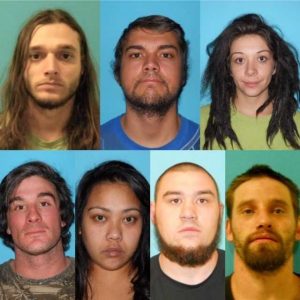 The Tuolumne County Sheriff’s Office reports that multiple search and arrest warrants were issued stemming from a drug dealing operation based out of an unidentified Twain Harte cocktail lounge. Undercover officials from the Tuolumne Narcotics Team and the California Department of Alcoholic Beverage Control purchased cocaine and MDMA (ecstacy) from suspects at the lounge on several occasions.

Arrest warrants were issued for Quentin Gelhaus, who allegedly led the drug dealing ring, with help from Christopher Mantzouranis, Richelle Diaz, Joshua Hankins, Allyson Bradley, Gary Somerville, Troy Mangrum and Sebastian Christensen. During a search of homes in Sonora and Twain Harte more evidence of drug sales was located, as well as nearly $9,000 in cash, and two loaded handguns determined to have been stolen out of Modesto.

According to Sheriff’s Office spokesperson Sgt. Andrea Benson, “Gelhaus and Diaz were taken into custody for their arrest warrants along with charges for possession of cocaine and MDMA for sale, being armed in the commission of a felony, conspiracy to commit a crime and child endangerment. The 6-year-old child who was present at the home was placed into the care of Child Welfare Services.”

She adds, “Mantzouranis was taken into custody on his arrest warrant with additional charges of possession of Cocaine and MDMA for sale, being armed in the commission of a felony, conspiracy to commit a crime, possession of a stolen firearm, and manufacturing of a controlled substance. Evidence of a Butane Honey Oil (Marijuana/Hash Oil) lab was found in his home.”

In addition, “Christensen was taken into custody on his arrest warrant along with fresh charges of possession of Cocaine for sale, and for committing a felony while out on bail stemming from a drugs sales arrest in December. Hankins, Bradley, and Mangrum were all located and taken into custody on their warrants for selling drugs to Under Cover Agents. Somerville has not yet been captured. He is wanted for drug sales in Tuolumne County as well as in Tennessee.”

The bust was referred to as “Operation Snowfall.” The investigation is actively ongoing.