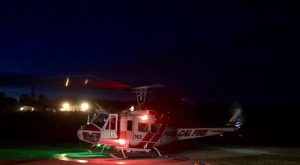 Bear Valley, CA — Emergency crews are on the scene of a rollover snowmobile crash in the Bear Valley area of Alpine County.

The CHP reports that it happened in the snow park area off of Highway 4. A female snowmobiler was trapped under the sled, according to the CHP, who also report an air ambulance has been called to the scene. The CHP reports the major injuries include a broken arm and legs.