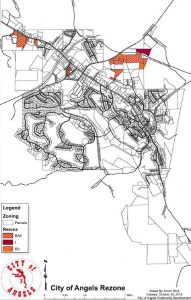 Angels Camp, CA — Rezoning 28 parcels to make them consistent with the City of Angels 2020 General Plan is at the top of the council’s next regular agenda.

According to the documents for next Tuesday’s meeting, staff is recommending that city council reintroduce an earlier proposed ordinance, waive the first reading and hold the first public hearing to discuss it in depth. The matter, discussed earlier this year, was the focus of an early April public hearing after which a second public hearing was set but then postponed.

Three resolutions on the regular agenda seek approval for the following: fundraising in support of the police department’s new K-9; a study extension not to exceed $20,000 regarding wastewater and water connection fees; a $5,000 audit expenditure reviewing the last fiscal year required by law since federal award expenditures exceeded $750,000 for the first time.

Among the consent agenda items, the council members anticipate the final adoption of Resolution 18-46, establishing an off-street parking fund and in-lieu parking fee of $3,500 per parking space as part of the city’s municipal code. No amount was previously established and the charge was previously set as equal to the cost of waived parking space.

The issue was recently elevated due to new construction in places with limited parking area, which included the recently opened Dollar General, whose ownership was unable to fulfill a reciprocal agreement to provide five required onsite spaces to park.

The council expects to approve closing Highway 49 between St. Patrick’s Church and Vallecito Road for the city’s annual Holiday Parade, scheduled for Saturday, Nov. 4 from 4:45 to 6 p.m.