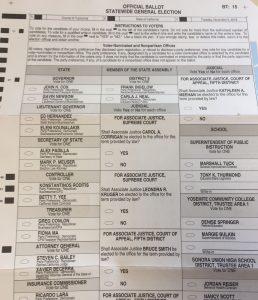 Tuolumne County, CA – Imagine the surprise of a Tuolumne County father when he pulled an actual official vote-by-mail ballot from his mailbox addressed to his underage son.

The 16-year-old’s Dad, Craig Korte of Sonora, detailed that it came in mail along with one for he and his wife. “I thought well maybe this is just an example ballot because he did sign up to pre-register when he got his driving permit,” explains Korte, who says that when he did look at it was identical to the other two.

A recent change in state law allows those under 18 to pre-register to vote through the DMV so that they are in the system when they turn 18.

“It definitely concerned me,” adds Korte. “I’m a Navy Veteran and a first responder and I believe the right to vote is a sacred franchise. I just felt that it was my duty as a citizen to bring it up. I was just curious what happened and if it was a bigger problem.”

To get some answers Korte contacted Clarke Broadcasting and in turn we inquired with the local elections office. Tuolumne County Clerk and Auditor-Controller Debi Bautista relays that it prompted a search of the underage voter rolls in the county, stating, “We went and checked every single voter under 18 to make sure we didn’t have any problems and there were the only two, him and another young lady, and both of them registered via DMV (one being Korte).”

And therein lies the problem, according to Bautista. The Department of Motor Vehicles (DMV) “motor voter law” that took effect in April automatically registers qualified applicants to vote when getting a license. In September, Governor Jerry Brown called for an audit of the Department of Motor Vehicles (DMV) amid long wait times and computer outages. Also that month, state DMV officials admitted that 23,000 voter registrations may have been botched due to a separate error. Then earlier this month, there was another so called “processing error” involving around nearly 1,500 people who may have erroneously registered to vote. The department stressed that none were illegal immigrants.

Bautista shares, “This has been the problem and one of the reasons why the secretary of state (Alex Padilla) suspended the motor vehicle registration is that multiple times we’ve had voters come across and they shouldn’t be active voters.” She continues, “I don’t know if these [the two underage Tuolumne County voters] slipped through the cracks. I don’t know why they weren’t part of the list that was identified, but we went and looked at every pre-registered under aged voter.”

The two ballots in question have been invalidated, according to Bautista.