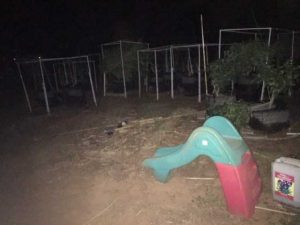 Update at 11:05am: An investigation into last night’s reported homicide in the Jupiter area is ongoing, according to Sgt. Andrea Benson. The family of the victim was notified, which is why they were able to release the name this morning. No additional information other than what was reported earlier has been released by officials to this point. We’ll pass along more details when they are available.

Original story posted at 9:23am: Twain Harte, CA — The Tuolumne County Sheriff’s Office is investigating a homicide that was reported last night at a marijuana garden in the Jupiter area.

Spokesperson, Sgt. Andrea Benson, reports that a call came into dispatch at around 10 o’clock that a man had been shot on Italian Bar Road near Rose Creek. Deputies responded and found 31-year-old Scott Andrew Rockey dead in a marijuana garden on his property. Detectives responded and interviewed witnesses at the scene. Child Welfare Services later took custody of a three year old child living at the home.

Anyone with information pertinent to the murder investigation is being asked to call the TCSO at 209-533-5815.