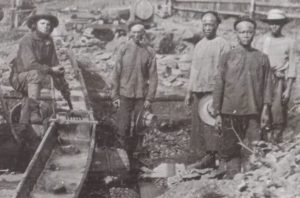 Yosemite, CA — Assemblyman Frank Bigelow was at the Yosemite Gateway Partners meeting this week to present a resolution noting the contributions of Chinese Americans to both Yosemite National Park and the Sierra Nevada.

He authored the resolution this past legislative session at the request of the Chinese Historical Society of Southern California and the National Parks Conservation Association. It is designed to showcase a more complete and diverse history of the individuals that helped shape the park and region. A presentation was given during the Yosemite Gateway Partners meeting held at the Yosemite Valley Lodge.

Besides Bigelow, others on hand included Jack Shu, Co-founder of the Sing Peak Pilgrimage, which is helping to preserve the history of Chinese Americans in the Sierra Nevada, Yosemite Superintendent Michael Reynolds, and Ron Sundergill with the National Parks Conservation Association.

You can read the resolution below:

WHEREAS, In the mid-1800s, thousands of Chinese immigrants came to the West Coast of America in search of gold and economic opportunities; and

WHEREAS, Despite anti-immigrant sentiments and racism, Chinese immigrants became an indispensable workforce by taking on jobs that were not desired by others and performing tasks so well that today their accomplishments illustrate the highest levels of human achievement; and

WHEREAS, During the winter of 1874 to 1875, Chinese road builders constructed 23 miles of the Wawona Road in four and one-half months, making the magnificent natural environment of Yosemite Valley accessible from the southern part of the park; and

WHEREAS, From 1882 to 1883, Chinese road builders completed 56 miles of the Great Sierra Wagon Road, most of which is now known as Tioga Road, using blasting powder to break rocks while working close to 10,000 feet above sea level; and

WHEREAS, The Great Sierra Wagon Road, one of the few passages over the Great Western Divide, enabled access to Tuolumne Meadows; and

WHEREAS, In Yosemite’s early years, hundreds of Chinese Americans worked in the many hotels providing guest services and growing fresh vegetables for thousands of park visitors; and

WHEREAS, For decades, numerous noted Chinese American chefs enhanced park visitors’ experiences with extraordinary meals, providing another reason for people to come to Yosemite’s hotels; and

WHEREAS, Tie Sing, a backcountry chef for the United States Geological Survey, served as the chef for the 1915 Mather Mountain Party, which was influential in forming the National Park Service, was a noted asset to the group’s experience in the Sierra Nevada, and has a mountain peak named after him on the southeastern border of Yosemite National Park; now, therefore, be it

Resolved by the Assembly of the State of California, the Senate thereof concurring, That the Legislature recognizes the legacy of California’s pioneer Chinese Americans and honors their contributions and the important role they played in the history of Yosemite National Park and the Sierra Nevada; and be it further

Resolved, That the Chief Clerk of the Assembly transmit copies of this resolution to the author for appropriate distribution.