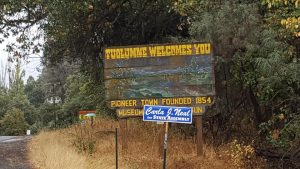 Thursday morning was the last straw for Tuolumne resident Aaron Rasmussen. He spotted a campaign sign blocking the Tuolumne City Museum sign along Tuolumne Road. He pulled over and took the political sign away.

Rasmussen was Friday’s KVML “Newsmaker of the Day”.

According to Rasmussen, the sign is now in a protected place and if the person wants the campaign sign back, he will give it back to them. However, Rasmussen would like to first have a conversation with the person to let them know that their sign placement was “unacceptable and inappropriate”, as it was blocking the Tuolumne township sign.

Rasmussen posted his thoughts and reasons for the removing the campaign sign on the internet and tagged each of the four Tuolumne County Supervisor candidates including Randy Hanvelt, Laurie Sylwester, Ryan Campbell and Anaiah Kirk.

“It is not a threat, but it is a message that there are too many campaign signs on public property. The citizens are getting fed up. Enough is enough.” Rasmussen continued, “All these signs are littering at the very least, not freedom of speech; it’s polluting, wasteful trash.”

Rasmussen ran for the Tuolumne County District 3 Supervisor seat during the primary election earlier this year, but lost.

“I ran a campaign with no signs. Most say that was stupid, but I say I respected my country side better then anyone else.” Rasmussen added, “You have the right to your freedom as long as it doesn’t effect someone else’s. Blocking our township sign effects us.”

With numerous campaign signs placed around Tuolumne County, Rasmussen feels that his freedom to enjoy the natural beauty of this area is being taken away.

Rasmussen said, “You want to exercise your freedom of speech like a real citizen should, go hold up your sign with your own two hands; or place your sign on your private property, not on our shared public property”.

When asked about the repercussions of removing and taking away a political candidate’s campaign sign, Rasmussen said, “I’m not worried. I have lawyers on my side if somebody really wants to get down and dirty. But blocking our public township sign with their own political campaign sign is wrong.”