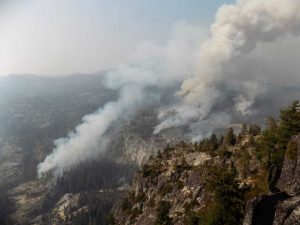 Sonora, CA — While acknowledging that the threat from the Donnell Fire has passed, the Tuolumne County Board of Supervisors are seeking changes in federal firefighting tactics to avert future large fires.

The Supervisors voted today to officially end the local state of emergency declaration related to the 36,450 acre Donnell Fire that ignited on August 1st in the Stanislaus National Forest.

District Five Supervisor Karl Rodefer said he would like county staff to work with the US Forest Service to do an in depth review of the initial attack of both the Donnell Fire and the 257,000 acre Rim Fire of 2013. He stated, “I think that the policies and procedures that have been in place need to be addressed. I am not after hanging people, or flaying them in public, or anything like that. I’m for figuring out how we do the job better the next time a fire breaks out in a river canyon or some kind of a drainage area. I would like staff to work with the forest service to find out how we do business better going forward. We can’t change the past, the past is gone, and in some cases it is very sad, but we can change the future.”

District One Supervisor Sherri Brennan added, “This is a much larger conversation, because it is a forest initiative policy. I’ve already started those conversations with our federal representatives to actively look at the policy that is in place, and how we do initial attacks, specifically in areas where we have overly dense canopies and limited access like the river canyons. I know that they are anxious, as soon as everything settles from the aftermath of the fire and the effects we are dealing with, to really start a conversation at the federal level.”

District Two Supervisor Randy Hanvelt pointed out that the county sent its own structure protection team shortly after the Dardanelles Resort area burned, and after that point, there were no additional structures lost.

The vote to end the local declaration, and seek a bigger conversation regarding initial fire attack policies in the forest, was approved 5-0.

While the declaration is over, the board noted that there remains a forest closure order in many areas of the forest, and a high danger level remains due to lingering impacts.