Hard Hitting Action On The Gridiron 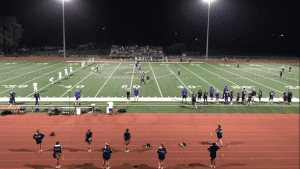 Bret Harte hit the end zone on their first drive using a double pass play to open the scoring; striking from 48 yards out and putting the Bullfrogs up 7-0 after the extra point was good. That would be the last time the Frogs scored. Towards the end of the first quarter, Sonora’s Evan Bearden hauled in a Jake Gookin bullet using his left hand only from 12 yards out and Bryan Wynne split the uprights. The first quarter would end in a tie 7-7.

In the second quarter, the Cats started out grinding away chunks of yardage on a drive capped by Connor Pullen rushing from 1 yard out and untouched into the end zone. Wynne would add another kick and it was 14-7, Sonora. The Wildcat’s Gookin would add another score on the ground from 12 yards out and with the point after Sonora took a 21-7 lead into halftime with their defense making a strong first half showing.

Gookin would add another score from the air hitting C.J. Castleman in full stride for 45 yards, but the point after attempt would fail and it was Sonora 28 Bret Harte 7. Pullen would add another touchdown; this time from 13 yards out, and the Wildcats would add a two-point conversion and extended their lead 35-7 to end the third quarter.

The final quarter saw Gookin add his second rushing touchdown from 4 yards out and the point after failed, the Cats were up 41-7. Joseph Shields would add one more score on a nifty 41 yard scamper and the attempt would fail, taking the score to its final of Bret Harte 7, Sonora 47.

Hats off to the Bullfrogs who battled throughout this game from start to finish. Sonora heads back home to the friendly confines of Dunleavy Field to take on the Argonaut Mustangs next Friday, October 5 at 7pm.

The Bears got shutout by the Argonaut Mustangs Friday Night, 28-0. This marks the second time Summerville has been held scoreless on the season and unfortunately it will move their record to 2-4.

Heading into halftime only trailing by a touchdown, the Summerville Bears defense looked stout. In the second half though, the Mustangs took the field and dominated Summerville through a very commanding rushing game.

After extending the lead to 21-0, the Bears were in need of a drive. Quarterback Jayden Brochnni, took the snap and threw a dart of a pass towards Chris Saint John, unfortunately to be picked off and taken back for a touchdown for Argonaut. That play would definitely seal the deal for the Mustangs.

Summerville has gone through some growing pains this year, a relatively young squad always does. Friday night they welcome Calaveras on homecoming night at Thorstad Field.

Calaveras hit the road to take on Amador and walked off the field hanging on to a big win 29 to 27 against the up to this point undefeated Mustangs.