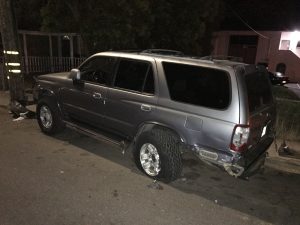 Update at 8:20am: A hit and run vehicle accident on South Stewart Street was one of several incidents that kept the Sonora Police Department busy overnight. The PD reports that a silver or gray sedan traveling south on Stewart Street veered into a parked SUV near the Lytton Street intersection. It caused major damage to the parked vehicle. The suspect fled the scene, but the PD was able to get witness statements regarding the crash and officials are working to identify the driver. It happened at around midnight.

The owner of the damaged Toyota 4 Runner has contacted Clarke Broadcasting and stated that she only had liability insurance on the vehicle, so she is really hoping the person responsible is caught. Anyone with information should contact the Sonora PD at 532-8141.

Original story posted at 6:40am: Sonora, CA — Details are limited, but an SUV is up on the curb, and debris is scattered on the street, along South Stewart Street in Sonora this morning.

The Sonora Police Department logs indicate that the incident was reported just after midnight. The police report notes that a sedan apparently struck the parked SUV and the responsible vehicle fled the scene. A “be on the lookout alert” was relayed to the Tuolumne County Sheriff’s Office and the CHP. A police department spokesperson was not immediately available to answer any followup questions. We’ll pass along more details when they become available.