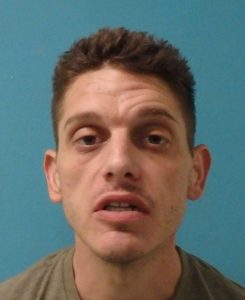 Sonora, CA —  Sonora Police arrested the same Mi-Wuk man nabbed a month ago for burglarizing a garage/shop in Twain Harte in August where security footage showed him fleeing the scene on a bike.

33-year-old Kenneth Eldred was arrested for the burglary last month, as reported here, after Tuolumne County Sheriff’s Detective received tips from the public. Eldred’s latest arrest stems from police responding to check out a car parked behind the Staples store in the Crossroads Shopping Center on Sanguinetti Road in Sonora. Officers approached the car around 7 a.m. last Thursday and found Eldred behind the wheel. He was already on parole, which allowed for a search of him and the car. It not only produced a can of pepper spray on his key chain, hypodermic syringe and a smoking pipe, but also CA ID cards, SSI cards and Bank ATM cards not belonging to Eldred.

Eldred was arrested for being a felon in possession of tear gas, having drug paraphernalia and misappropriation of lost property. That property was returned to the rightful owner, according to police.