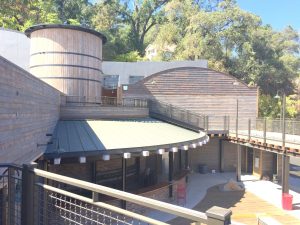 After sinking millions into the city’s circa 1940s armory and adjacent Green Street properties that formerly housed Stage 3 Theatre and his Bourbon Barrel restaurant, Kennedy says he has listed the property for sale with Restaurant Exchange in Sacramento.

Snaking orange extension cords, ladders and other contractors’ equipment, still in active use, can be seen inside the highly awaited, nearly complete entertainment complex. Inspections are underway now even as its future ownership is uncertain. Kennedy says his family is also planning to sell their home and a rental property through local realtors and move fulltime to Florida.

In the meantime he shares he will be actively helping to market the complex, confiding he has already heard of some interest from nonlocal people in the restaurant and music industries. While he might not get his full investment back he says, he has the ability to wait it out for a reasonable offer.

In a phone interview with Clarke Broadcasting, Kennedy, who has been out of the area since June while attending to other various business interests, says that this weekend he will personally view the progress and go over final finishing plans for the restaurant expansion, indoor performance space, retail area and outdoor two-level Green Dog Beer Company beer garden.

A quick tour (view pictures in the image box slideshow) reflects an impressive, meticulously thought-out and no expense spared dining, socializing and live performance space. Kennedy readily admits the completion costs grossly exceed the original budget of the project that has taken well over two years to get to this point.

A gleaming, fully-loaded quarter of a million dollar kitchen sits nearly ready to use. Throughout the entire space, repurposed wood features from old local buildings and hand-picked Americana antiques are cleverly installed; including in the bathrooms, where old license-plates decorate stall doors and the men’s room urinals are made from beer kegs. Huge planters in the biergarten await the installation of mature trees and a plumbed housing cavity awaits a custom water feature. Kennedy notes that artist Judy Grossman is still set to paint a commissioned wall mural of the Green Dog Beer Company logo.

Asked why he is still doggedly determined to pour money into the venue, he replies, “Look, this was never about the [money]…I made the decision on what was right for the facility and to attract the clientele we want to bring to the area.” He says his recent decision to abandon operational plans is based on what he calls an ideological issue that needs to be fixed by the City of Sonora and Tuolumne County. While noting what he calls nearly constant planning obstacles, neighbor complaints and other irksome issues, he blames the city’s move to locate a bus stop by his Trado Restaurant Corporation building — effectively blocking three-quarters of the parking spaces — as the final straw.

Attempting to sum it up, “It really got us to a point where we looked…and said it is clear that the city leadership is not getting the vision of what Sonora could potentially be — and ultimately it has made us decide that we are going to move in a different direction and find somebody else to run the facility,” he states.

“I just don’t think that the City of Sonora has the vision for how they are going to change that downtown area and keep up with the likes of Livermore…Murphys — or other towns in the area that are thriving tourist destinations — and that is something that needs to be addressed on a much bigger level,” he adds.

Not Opposed To Retaining An Interest

Questioned as to how he could leave a practically turn-key business with his heart, money and fingerprints in and all over it, he boasts that that for someone else it will be a “guaranteed home run out of the park” for anyone. That is, he says, as long as they don’t mess it up by providing poor service or bad food. So we query, why not keep a hand in it?

And unless somebody steps in before the final flourishes are in and decides to change names, Kennedy says getting the Green Dog mural is just another part of getting the building ready for opening. He shrugs, “If they step in and don’t like dogs — or green dogs — they can have another mural painted and put it on the building.”