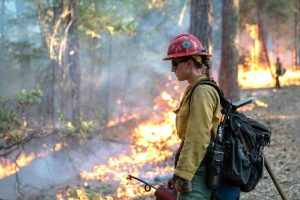 The Mendocino Complex Fire in Lake County also sadly destroyed 280 structures, resulted in one fire fighter death and four other injuries. The US Forest Service reports that work will continue over the coming months repairing suppression impacts and preventing erosion. The fire area in the Mendocino National Forest remains closed until further notice.

The Stanislaus Complex Fire, which ignited in August of 1987 in Tuolumne County, is the 18th largest at 145,980 acres.