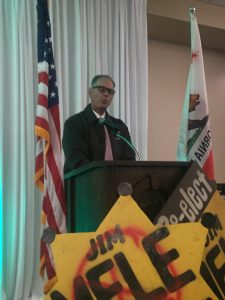 Mele’s retirement party was held last night at the Black Oak Casino Resort in Tuolumne. Commenting on his days as sheriff, Mele thanked his department, stating, “It’s the people, it’s the dispatchers. I love my little circle. I love my dispatchers. The time that we spent, I will cherish forever.” He continued by taking a light hearted jab at deputies, “I love my deputies that I got to work with…Going on a pursuit and then they’re out eating and I’m the only one working (Laughter erupts). They hear me going in pursuit. So, they’re coming from Twain Harte, Jamestown, from everywhere. I got ‘em [the suspect] on the street with my foot on ‘em as they [Deputies] come in.” Mele shaking his head adds, “I don’t need you guys. You’re a day late and a dollar short [more laughter].”

Mele announced he would be retiring through a letter addressed to the community, as reported here in February, but gave no date. Then in May, he shared that he would retire on June 30, freeing up money for the next year’s fiscal budget, detailed here. Four days later at a Tuolumne County Board of Supervisors meeting, Sheriff Mele was recognized for his 30 years of dedication to his department and the county. The supervisor’s chambers were packed with those taking the podium to speak of their admiration for the Sheriff, including state and local leaders, as detailed here in this earlier report. Former Undersheriff Bill Pooley was elected to replace Mele in the June primary as he ran unchallenged.

Last night was all fun and games with some toasts and a bit of roasting to celebrate not only his work as sheriff, but the man who committed his life to public service.