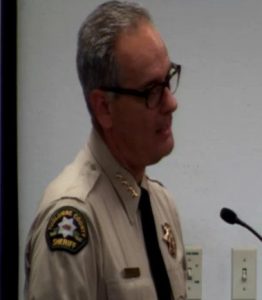 Sonora, CA – It was a packed house at the Tuolumne County Board of Supervisors meeting in Sonora today as plenty of praise was poured on retiring Sheriff Jim Mele for his 30 years of service to the county.

Many who spoke admired him for his integrity and leadership skills. He even received letters that were read aloud from Senators Dianne Feinstein and Kamala Harris, Congressman Tom Mclintock, Assemblyman Frank Bigelow and State Senator Tom Berryhill. Noting Mele’s long law enforcement career that began in 1988 as a Jail Deputy Recruit and end as a three-term elected Sheriff-Coroner, as reported here, supervisors unanimously voted for a retirement resolution commending Mele for his service to the community.  With his voice cracking, he humbly told the crowd, “Thank you for allowing me to serve you. Thank you all. My boys and girls in tan and green (Deputies), my clerical staff and all of you; thank you. You’ve made this some of the happiest times. I’ll never forget the horrible things that we saw or the horrible pieces that we had to pick up after. That’s what we have in common is that. I love you all. I really, really, really do. This is the finest place to live. This is the finest place to raise a family. God bless you all.”

Others who took the podium to give his accolades included Sonora Police Chief Turu VanderWiel, CAL Fire Unit Chief Josh White, and CHP Lt. Commander Shane Ferreira. Sheriff Mele’s last day on the job is June 30th.  To hear his entire speech click here:Sheriff Mele’s Recognition Speech before the TC Board of Supervisors