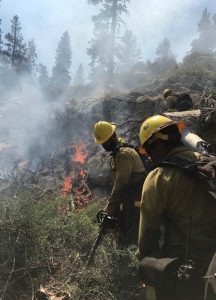 Tuolumne County, CA — The number of firefighters assigned to the Donnell Fire has dropped to 164, and the Forest Service reports that no more structures are considered threatened.

That said, 54 notable structures have been destroyed (cabins and businesses) and an additional 81 outbuildings. Permits are being issued to homeowners to assess the property damage.

The Burned Area Response Team will start mitigating hazards on the southern end of the fire in an effort to repair damage ahead of winter and work to prevent things such as flooding. On the northern end, above Spicer Reservoir, the fire still remains active, so crews will work to contain the spread.

Highway 108 is open for through traffic only, and it is illegal to stop between Eagle Meadow and the turnoff to Kennedy Meadows. The Kennedy Meadows Resort is open, as well as Relief Reservoir, Baker Campground, Deadman Campground and the Bull Run Lake area.

What ignited the fire, on August 1, remains under investigation.