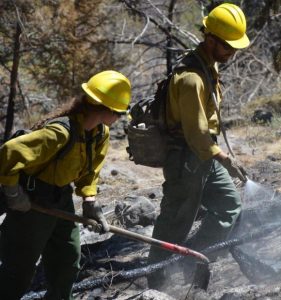 Working in the Donnell Fire area

More details in a timeline about the Donnell Fire is here. It continues to burn on the eastern perimeter into the Carson-Iceberg Wilderness, so firefighters are focusing on building and strengthening lines on the eastern edge. As this area is located in remote, inaccessible country, crews are spiking out, or camping near the area as opposed to in base camp.

It is the 27th day of the blaze, which has destroyed 54 structures and continues to threaten 220. So far there have been six injuries and 81 minor structures destroyed. Today’s personnel totals 524, which includes 11 hand crews; seven helicopters; nine engines and five water tenders.

The main fire camp has moved to Bear Valley and will be supporting the crews. The satellite camp in Kennedy Meadows remains to support firefighters working on the fire’s southeast area. Officials are also looking at the Highland Lakes area to the north for contingency planning as the blaze could make a run up the Arnot drainage, which leads to there.

The fire closure area remains in effect between Eagle Meadow and Kennedy Meadows where thru traffic only is being permitted along Highway 108. The only areas that are currently open are Kennedy Meadows Resort, including Baker and Deadman campgrounds.

However, as firefighters are actively working on hazard trees and suppression rehabilitation along the corridor, officials stress the importance of respecting the closure for safety’s sake; motorists should be prepared limit their view of the fire area’s altered landscape to what can be seen while remaining inside their moving vehicles.

The Pacific Crest Trail remains closed between Highways 108 and 4.

Fire Closure Order STF-16-2018-011 remains in effect; under it Highland Lakes Road (Forest Service Road 8N01) is open to Tryon Meadow, Pacific Valley Campground and to the Bull Run Lake access area; however the trail is closed at the Carson-Iceberg Wilderness boundary.

The forest area impacted by the fire remains closed under Fire Closure Order STF-16-2018-011. This includes all residences and campgrounds along Eagle Meadow Road (5N01), the Highway 108 corridor and the Clark Fork Road area. Property owners may obtain permits for access through the Summit Ranger District.