Update On Donnell And Ferguson Fires 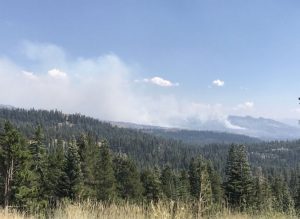 While the 100-percent containment on the Ferguson Fire is a significant milestone, mop-up operations will continue over the next several weeks. Over 800 firefighters remain assigned to the incident. The BAER team is currently conducting damage assessment to see what needs to be repaired ahead of the wet winter months. Longterm recovery efforts will then continue over the coming years. What ignited the fire is still under investigation. The acreage is 96,901.

The Donnell Fire is now 31,743 acres. We reported yesterday that Highway 108 will reopen at 4pm today through the burn area. However, you are not allowed to stop anywhere between Eagle Meadow and Kennedy Meadows. Once you get to Kennedy Meadows you are allowed to travel on the road that leads to the resort, and stop there. A large law enforcement presence will be on scene patrolling to keep an eye on properties still off limits within the burn scar. The fire has most recently been burning the hottest north of Spicer Reservoir. Smoke columns have been visible from Highway 4.