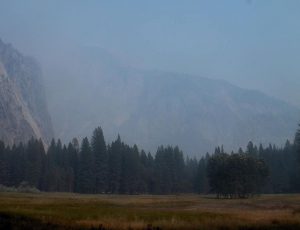 The unhealthy haze forced the parks closure on July 25. It has already been over two weeks making it the park’s longest closure in more than two decades, but park officials are optimistic the Yosemite Valley could possibly reopen early next week after several targeted dates had to be pushed back, as reported here.

“We are hoping to get back open on Monday but conditions have to be safe,” tells park spokesman Scott Gediman to the Associated Press. Gediman clarifies that it will be reassessed this weekend and based on air quality, visibility, weather patterns along with the safety for firefighters conducting back burning near the park’s southwestern border.

The shutdown of the main attraction, Yosemite Valley, brought along with it hundreds of campsites and hotels closures. Since it comes during the height of the summer season, it has been a major financial blow to the park with thousands of tourists summer trips abruptly canceled. However, firefighters got a boost as overnight the blaze’s containment jumped to 79-percen. That has allowed the “backhauling” operation to begin, which involves crews pick up discarded equipment like hoses, generators, chainsaws and pump kits all tagged with GPS trackers for easy retrieval. The items are then cleaned, repaired, and organized to be ready for the next incident, according to fire officials.