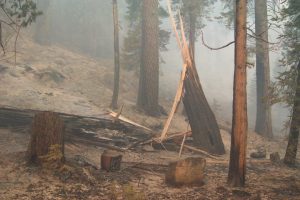 Update at 8:25 p.m.: Incident Command is reporting a drop of 1,353 acres in the size of the Donnell Fire in the Stanislaus National Forest making the total acreage 19,744 acres instead of the previous 21,097 reported this morning.

“No, the fire isn’t shrinking,” according to spokesperson Maria Benech. Instead, she explains, “Ground crews were able to map out the fire’s perimeter using GPS, which is more accurate.”

The number of structures threatened remains at 220 with 55 structures destroyed along with 81 outbuildings. Benech shares, “We have been able to notify all permittees in the area regarding the condition of their structure.”

A timeline of Donnell Fire news stories is here.

She recounted today’s fire activity, stating that the inversion layer lifted and created a plume of smoke, but noted that the flames did not advance much. She added, “The fire did continue up the Disaster and the Arnot Creek drainages and a little bit up the Douglas Creek drainage also. There was a little bit of movement on the south, but we had an opportunity to put in and beef-up those hand and dozer lines that are on that south end.”

Benech stressed that the top priority remains structure protection. The number of resource went up to 617 personnel including 7 hand crews, 3 helicopters, 42 engines, 5 dozers, 5 water tenders. For evacuation information and road closures view below.

Original post at 11:20 a.m.: Tuolumne County, CA — The Donnell Fire in the Stanislaus National Forest has grown to 21,097 acres and there is six-percent containment.

There are now 602 firefighters assigned to the incident. 55 structures have been destroyed along with 81 smaller outbuildings. 220 structures are considered threatened. The Forest Service reports the fire pushed further up the Arnot and Disaster Creek drainages to the northeast and crossed the north side of Highway 108. Increased fire activity is expected today due to the lifting of the inversion layer and stronger southwest winds. Structure protection continues to be the priority along Highway 108 and the Eagle Meadow Road, including protecting the famous Bennett Juniper.

The fire started at the inlet of the Donnell Reservoir and is burning along the Middle Fork of the Stanislaus River in steep and inaccessible terrain. It spread to both sides of Highway 108 near Brightman.

As for current growth, the fire is burning north into the Carson Iceberg Wilderness area between Arnot Creek and Disaster Creek Drainages and east to the Eureka Valley along Highway 108.