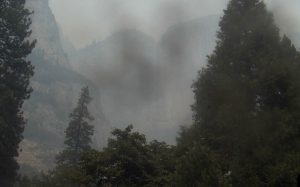 This is Day 12 of the Ferguson Fire, more updates are here.

Evacuation orders for Mariposa Pines Residents on Scott Road from Best Road to the end of Hites Cove Road, including all side roads, have just lifted but remain under advisory in case that conditions change. This area will be open to residents only. All residents on Jerseydale Road between lower Best Road and Triangle Road remain in Mandatory Evacuation status.

According to the evening report, total assigned personnel of 3,434 includes 220 engines; 47 water tenders; 16 helicopters; 88 crews; 59 dozers. Officials describe the incident area as relatively calm throughout much of the area; a heavy inversion layer kept fire activity to a minimum.

North of the Merced River on the Stanislaus National Forest, firefighters constructed indirect containment lines up Soapstone Ridge, opening old roads near the burn scar of the 2013 Rim Fire. Crews strengthened and improved containment lines east toward Eagle Peak and down to El Portal.

Along the eastern edge of the fire, crews were successful initiating strategic firing operations to remove unburned vegetation between containment lines and the fire. Crews also evaluated structures for defensible space.

South of the Merced River on the Sierra National Forest, containment lines were secured from Jerseydale across to Wawona Campground. Crews will continue planning strategic firing operations to help build a wider buffer to stop the spread.

Mariposa County Sheriff’s Office emphasizes that it will have a heavy presence in the area to ensure the security and safety of residents and businesses. Due to the large amount of emergency equipment in the area speed controls will also be enforced. There will still be smoke in the respective areas as firefighters continue firefighting operations. If any resident at any time feels unsafe, he/she should call 911.

Officials stress that those with questions or concerns regarding power should contact PG&E at 800 743-5000. Anyone seeing electrical wires on the ground should stay clear and contact the utility immediately. Trees and poles with deep charring, particularly if still smoking, should be considered hazardous.

Residents reentering properties should evaluate damage; be particularly aware that hazardous conditions may exist if a residence or outbuilding has burned. Hazards may include asbestos, heavy metals, by-products of plastic combustion and various other chemicals.

Update at 5:47pm: Another Ferguson Fire Community Meeting is planned for the midweek in the Coulterville area.

Hosted by the Unified Commanders, CAL Fire, U.S. Forest Service and Mariposa County Sheriff’s Office, is is slated for tomorrow beginning at 6 p.m. at the Greeley Hill Community Center (10332 Fiske Road). There, multi-agency officials will discuss and update the current situation of wildfire activity and operations.

Too, due to the pending temporary Yosemite Valley and Wawona closure (see below),  YARTS is suspending bus service until further notice. There will be three buses leaving Yosemite Valley for Tuolumne County destinations Wednesday morning at 10:20, 10:50 and 11:20 a.m. but YARTS will not be taking passengers to Yosemite.

Following the conclusion of a community meeting at the park this morning, Yosemite officials released word that Yosemite Valley and Wawona will close at noon tomorrow to all visitors and will remain so until Sunday. The Mariposa Grove of Giant Sequoias is also listed as closing along with the park’s South Entrance.

The shutdown includes all hotels, campgrounds, and visitor services. Visitors currently staying in park campgrounds and lodging facilities are being told to leave by that time. With the ongoing closure of Highway 140 from about two miles east of Midpines to the Cedar Lodge area, visitors are being directed to exit the park via Highways 120 and 41.

A Yosemite alert further notes that due to firing operations and smoke a closure order for visitors will start at midnight for Yosemite Valley and Wawona.  Two photos in the image box slideshow show Yosemite Conservancy webcam images of Yosemite Falls and Half Dome showing heavy smoke that barely allows view of the iconic landmarks.

Since the fire began Friday, July 13, several other park facilities and roads have closed due to fire impacts and in support of firefighting operations. Among these closures are Glacier Point Road, Bridalveil Creek Campground, the Wawona Campground and the Merced Grove of Giant Sequoias.

At this time, Highways 120 West and East and the Tuolumne Meadows area remain open, as does Tioga Road and Tuolumne Meadows, including the Big Oak Flat and Tioga Pass entrances, and Hetch Hetchy.

Park officials note that at least a thousand campground and hotel reservations are being canceled. Although Yosemite Valley is not currently considered to be in imminent danger, the closure due to wildfire activity is the first in nearly three decades as it last happened in 1990.

Update at 8:20 a.m.:  Crews held the Ferguson Fire flames, burning near Yosemite National Park, to just 500 new acres overnight, marking the total acreage at 36,587.  Progress was also made on the containment, which is up to 25-percent.

On the Sierra National Forest side, crews completed a containment line from Jerseydale to the Wawona Campground last night. Meanwhile, firefighters will continue to “plan and be ready to implement strategic firing operations to help build a wider buffer to stop the fire’s spread,” according to Incident Command, that add crews will also strengthen and improve those lines today.

For information on a community fire meeting this morning and the Celebration of Life for fallen Heavy Fire Equipment Operator Braden Varney in Modesto yesterday view below.

Original post at 6:45 a.m.: Mariposa County, CA — Firefighters were able to hold the Ferguson Fire flames overnight to a minimal gain of about 500 acres for a total of 36,587.

Crews also made progress on the containment bringing it up to 25-perecent. Yesterday morning, fallen Heavy Fire Equipment Operator Braden Varney, who died battling the fire, was honored at a Celebration of Life in Modesto, as reported here.

Another community fire meeting is in the works for this morning. It will be hosted by the Unified Commanders, CAL Fire, US Forest Service, and Mariposa Sheriff’s Office who will overview the current fire status and plans to battle it and also field questions from attendees. It begins at 11 a.m. at Yosemite Valley Auditorium located at 9035 Village Drive in Yosemite National Park.