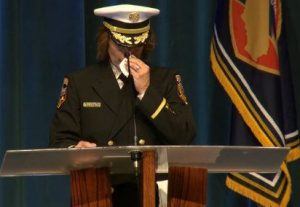 This is Day 11 of the Ferguson Fire, more updates are here.

Update at 4:15pm: Another Ferguson Fire community meeting is in the works for tomorrow.

Hosted by the Unified Commanders, CAL Fire, US Forest Service, and Mariposa Sheriff’s Office, the meeting, beginning at 11 a.m. at Yosemite Valley Auditorium (9035 Village Drive) at Yosemite National Park, will overview the current fire status and plans to battle it.

Among the many eulogizing Varney at the event, which wound up around 1 p.m. today, was CAL Fire Madera-Mariposa-Merced Unit Chief Nancy Koerperich and his wife Jessica, the mother of their five-year-old daughter Malhea and three-year-old son Nolan.

The chief described Varney’s loss as “a gut punch” to everyone who knew him, recounting the heroic efforts through the fire and dangerous terrain to safely retrieve and return him to his family.

Thanking his family for their patience and understanding during that ordeal, she also expressed great appreciation to all the fire and law enforcement units who assisted in bringing and/or helping honor escort Varney all the way to Modesto — and the many members of the public who lined the way.

For photos from the ceremony and of the ongoing fire incident click into the image box slideshow.

Update at 7:15 a.m.: Incident Command relays that one outbuilding has been destroyed but stress “dozens more have been saved because of the efforts of crews throughout the fire area.” This weekend the threat to structures surged from 216 to 3,494 after a mandatory evacuation order was issued for Old Yosemite Road, southwest of the Buck Meadows area in Mariposa County.

New help in the skies to battle the blaze as a pair of DC-10 tanker planes and a fleet of helicopters are being utilized to slow the fire’s spread. To the south, the fire continues to burn in the Chowchilla area and indirect-line construction is moving forward to protect Wawona and Yosemite National Park.

Firefighters are making good progress building lines to help contain the blaze as they gained 13% contained overnight the total acres is 33,743 acres.

Additional details on the fire and a Celebration for Life for a fallen firefighter are below.

Original post at 6:30 a.m.: Mariposa, CA — The latest update on the Ferguson Fire, burning on both the Sierra and Stanislaus national forests, overnight the acreage rose by nearly 1,300 acres to a total of 33,743 acres, but some good news this morning the containment rose to 13-percent. However, the threat to structures surged from 216 to 3,494 this weekend. The explosion in the number came with the afternoon mandatory evacuation order for Old Yosemite Road southwest of the Buck Meadows area in Mariposa County as the fire moved north toward the Montgomery Gulch and Anderson Valley vicinities.

Another two firefighters were injured battling the blaze bringing the total to six, as reported here yesterday. Fire spokesman Rich Eagan says the firefighters were hospitalized Friday after suffering back injuries. Both have been released and are expected to fully recover. Two of the other four firefighters also had back injuries involving muscle strain, another one suffered from a leg fracture and the other from dehydration.

Honoring a fallen firefighter, a public visitation was held yesterday in Modesto for fallen Heavy Fire Equipment Operator Braden Varney. Today there will be a Celebration of Life, also in Modesto, at the House Church located at 1601 Coffee Road. Road closures in the area begin at 10:30 a.m. with the service starting at 11 a.m.