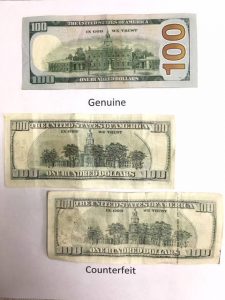 Sonora, CA – Tuolumne County Sheriff’s officials want to alert the public and merchants that counterfeiters may be working in the county.

The phony money producers passed several fake $100 bills recently, according to Sheriff’s officials, who did not detail where in the county or what retailers were hit. There is no description given regarding a suspect and the counterfeiters remain on the loose.  Sheriff’s officials recommend merchants purchase a counterfeit pen, which can detect fake money by drawing a line on a bill and if the ink changes color, the money is counterfeit.

Anyone who may have received bad cash should report it to local law enforcement immediately.