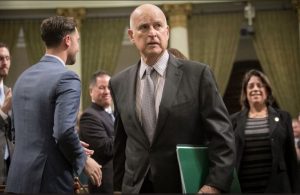 Sacramento, CA — State lawmakers and Governor Jerry Brown remain busy this afternoon on what is the last day that initiatives can be pulled from the November statewide ballot.

Governor Jerry Brown’s Office confirms he signed the internet privacy bill that the State Senate passed just this morning and the Assembly rushed through in order to meet a deadline with the chief backer of a similar voter initiative, who had agreed to withdraw it today if the bill passed.

Among other bills signed under similar deadline, Brown approved AB 1838, drafted by the Budget Committee in response to beverage industry maneuverings. It establishes a 12-year moratorium on imposing new assessments on soda at the local level, following similar bans recently passed in Arizona and Michigan.

The American Beverage Association has backed statewide bans after several cities passed similar taxes and the industry was able to successfully fund a troublesomely worded state ballot measure that would, if passed, raise the threshold for ANY local government tax increases by changing a simple majority vote to one needing two-thirds voter support, a city council or a county board of supervisors. Backers of the measure agreed to pull it today if the ban passed.

In a note to the Assembly, Brown cited that out of 482 cities in the state four are considering passing a soda tax to combat the dangerous and ill effects of too much sugar in children’s diets, which triggered the beverage industry into bringing “a far-reaching initiative” to the ballot that he described as an abomination for legislators.

Brown pointed out that, if passed, the effects would impact measures concerning all topics in all 482 cities. He further noted that mayors from countless cities called to voice their alarm and to strongly support the compromise represented by the Assembly bill.

Brown also penned his approval to AB 807, which directs the Secretary of State to place a proposition on the statewide ballot enabling voters to repeal the state’s Daylight Saving Time Act. If passed, Brown remarks that it will – albeit through a circuitous – open the door for “year-round daylight saving.”