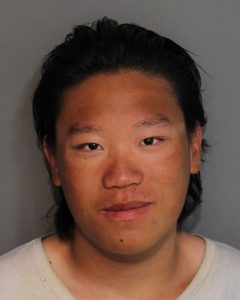 San Andreas, CA – Calaveras County sheriff’s officials have arrested a “person of interest” they were seeking who allegedly broke into the lobby of the Wells Fargo Bank San Andreas branch location.

As reported here, deputies have been seeking a man caught May 8 on after hours surveillance footage shattering the front door glass with a rock then entering, also asking the public to be on the lookout.

Friday, just after 3 p.m. in San Andreas, officials report that a deputy saw and recognized the suspect, 22-year-old Andy Xiong, a Willows resident who may have been living locally as a transient. He was subsequently arrested and booked into the Calaveras County Jail for felony vandalism relating to the case.