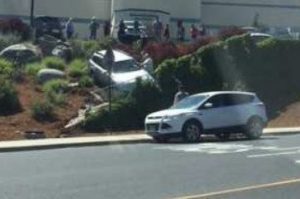 Update at 4:45 p.m.: Sonora Police released further details on what caused a vehicle to plunge down a dirt embankment from an Adventist Health Sonora parking lot on Greenley Road in Sonora. Dispatch reported that a male driver got into his parked vehicle and thought he had put it in reverse, but instead it was in drive. When he pushed on the gas pedal, the vehicle jumped the curb and sailed down an embankment smashing into a fence. The man was not injured in the crash and his name is not being released, according to police.

Update 4 p.m.: Sonora Police report that the wreckage has been cleared.

Original post at 3 p.m.: Sonora, CA — Sonora Police Officers are on the scene of a crash at Adventist Health Sonora on Greenley Road, which has traffic backed up as drivers slow down to check out the wreck.

The pictures in the image box show the vehicle jumped the curb of the hospital parking lot and then sailed down an embankment smashing into a fence. Police dispatch report that an ambulance was called to the scene but just as a precautionary measure and it is  unclear if there are any injuries at this time. A tow crew is heading to the scene to remove the vehicle. Greenely Road is open to traffic.