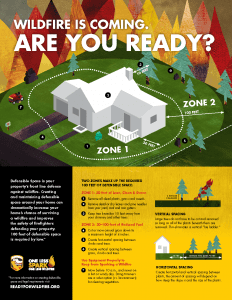 “Our firefighters train hard to prepare for wildfires. Residents need to do the same,” CAL Fire Director Chief Ken Pimlott states. He points out that wind-driven embers can destroy homes or neighborhoods far from a wildfire’s actual flame front. “The reality is that in a major wildfire, there simply will not be enough aircraft, fire engines, or firefighters to defend every home in the early stages of the incident — this reality requires you to take personal responsibility for protecting yourself, your family, and your community,” he emphasizes.

Along with creating a defensible space by clearing brush at least 100 feet or more away from dwellings and outbuildings and using fire resistant landscaping to help stop the spread of wildfire, state fire officials say to safeguard homes by using fire-safe construction features; also address potential points of entry where embers can enter the home during a fire.