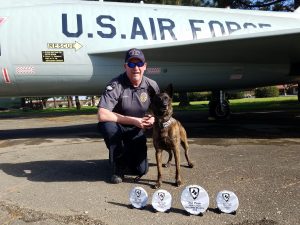 Angels Camp, CA — The City of Angels Camp’s Police Chief, and K9, took part in a police dog competition at the Travis Air Force Base.

The fifth annual event was held over two days last week and hosted by the 60th Security Forces Squadron. The K9 teams were tested in locating concealed narcotics and explosives, searching for humans, obedience, agility and handler protection. All teams competed for points and were judged by officials with the Western State Police Canine Association. The teams also had a chance to network with others throughout the region.

The team of Angels Camp K9 Kato and Police Chief Todd Fordahl placed second in the building search competition, third in vehicle search, third in narcotics detection and fourth in the protection phase of the patrol competition.