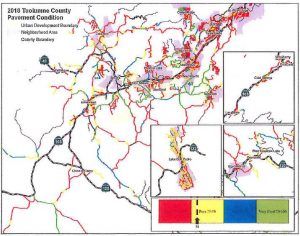 Sonora, CA — While it was far from a rude awakening, the Tuolumne supervisors today received quantitative evidence of the poor, continuing to deteriorate state of local roads and discussed the “gas tax” as perhaps a necessary evil.

Tuolumne County Community Resources Agency staff made a presentation on the current condition of the roadway network at today’s regular board meeting. It also recommended that the board pass a resolution officially supporting supporting Prop 69, which would prevent new transportation funds from being diverted to non-transportation purposes; and also opposing an SB 1 “gas tax” repeal bill set for the November ballot.

With Supervisor Sherri Brennan absent, the remaining four had little problem getting behind Prop 69. Belly-aching about the need for SB 1 funds — in spite of the fact that the monies come from taxing gasoline purchases tax — the board unanimously stopped short of formally endorsing it for what at least two members admitted outright was for political reasons.

SB 1: Hard To Love, Tougher To Argue Against

Supervisor Karl Rodefer particularly noted that local voters need to understand the importance of the revenue stream come November so they can ultimately decide for themselves and cast their votes accordingly. Staff estimates are that through SB 1 the county should receive $4 million annually for the next ten years towards roadway maintenance.

However it was plain by the presentation that the county is multi-millions away from being able to maintain its roadway network in a” good state of repair.” Staff offered up the figure of $217.5 million over the next 20 years, nearly $11 million per year to cover just the costs of pavement only maintenance.

Some takeaways from the staff presentation include that the county’s Pavement Condition Index (PCI) continues to slide every year. The current network average PCI of the county’s roads is 33 on a scale to 100, which falls into the poor range between 25-50. Back in 2012 it was 46 and dropped in 2016 to 36.

Overall, Tuolumne County’s roadway network is just shy of 532 paved road miles. While the arterials and major collector roads are in very good to good shape, the minor and local collectors rate poor to average overall. Local roads, which make up 54 percent of the total paved county roads have an average PCI of 22, which falls into the very poor category.

According to the county’s 2017 annual report, the road fund was $5.3 million of which $3.5 was used for road maintenance; $1.1 specifically used for pavement maintenance.

Staff pointed out a current lack of budget for preventative maintenance, also noting that the county could ideally spend $198 million over 20 years above Road Works’ operating costs — $83 million in just the first 3 years and then $6.7 million for the next 17 in order to get the network into a healthy state.

Then there is the fact that the county, already reeling from road damage repair needs from 2017’s devastating winter storms, was hit from the recent impacts of another round of atmospheric river incident flash flooding. Even with incoming disaster funds the financial and operational impacts are still significant.

Rodefer stressed, “I want the public to understand that if we don’t get the SB 1 funding, our roads…will get worse. They won’t even stay where they are at now and they are terrible. None of us liked the source of that funding — i.e. the ‘gas tax’ that everybody is up at arms about — I am not a fan of that tax in any way, shape, or form.”

Continuing, he lamented, “But [getting to] that was a four-year process, maybe more working hard with RCRC [Rural County Representatives of California] and CSAC [California State Association of Counties] to come to some legislative language and a funding source that would be salable throughout the State of California.”

With concurrence from the other supervisors, Rodefer indicated that if SB 1 is repealed, the county roads, which need all the funding they can get, will just continue to deteriorate. “At best we are looking for another four years’ effort to try and come to some other kind of resolution to replace that funding…so while I am not in favor of the funding source for it and this board voted with reservations to support SB 1 when it went through the legislature…the people in Tuolumne County need to know what’s at stake in November.”