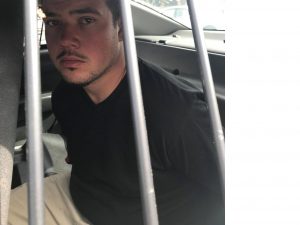 Sonora, CA — The Sonora Police Department pulled over a truck on South Washington Street because the driver was suspected of being under the influence.

It happened Sunday at 12:30pm. The police department responded to the area because of an earlier tip about the vehicle swerving near Highway 49 and Pesce Way. The vehicle was a Dodge pickup truck with paper license plates. After it was pulled over, officers learned that it had been stolen out of Modesto. The driver, 22-year-old Daniel Lee Chisum of Modesto, was arrested for vehicle theft and possession of stolen property. The lone passenger, 37-year-old Maurice Lincoln Matthews of Tracy, was not connected to the vehicle theft, but was cited for being in possession of drug paraphernalia. Chisum was taken to Tuolumne County Jail and booked on $30,000 bail.