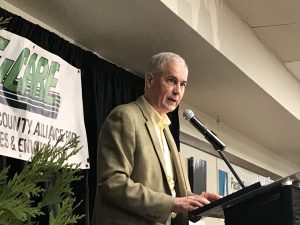 Sonora, CA — Hundreds were on hand Saturday evening at the Sonora Elks Lodge to celebrate the 30th anniversary of the founding of local organization TuCare, the Tuolumne County Alliance for Resources and the Environment.

The keynote address at the group’s annual dinner was delivered by Tom Lealos, one of the founders of TuCare. It was noted that with the support of his boss at the time, Dick Pland of the former Fibreboard Wood Products, Lealos helped brainstorm the idea for this new organization along with George James and Nancy Rosasco. Lealos said environmental policies had “run amok” and some groups were spinning up “hot button issues” that were hurting rural communities that relied on the forest products industry. He feels TuCare has remained relevant for its insistence on having a seat at the table with decision making agencies, and not shying away from contentious discussions.

Other speakers included former TuCare Presidents Jeff Sargo and Mike Albrecht. It was noted that over 100,000 adults and children have gone through one of TuCare’s natural resource tours or other educational programs.

Congressman Tom McClintock and Assemblyman Frank Bigelow were both on hand to give the organization special proclamations. Stating his disdain for federal forest policies over the past 45 years, McClintock stated, “For 30 years, TuCare has played a pivotal role in exposing the economic and environmental damage that these policies have done.”

The event drew several other local politicians and decision-makers. The night also included a dinner and live auction.