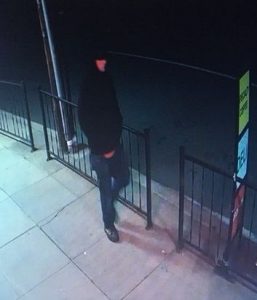 San Andreas, CA –Investigators report that in the wee hours a thief broke into and burglarized yet another Valley Springs convenience store.

According to Calaveras County sheriff’s officials, deputies responding to an alarm sounding around 12:45 a.m. at the Valley Springs Dollar Plus on California Street, found that the yet to be identified suspect had gained entry by throwing a rock through the front glass.

Once inside, the person grabbed an armload of tobacco products and then fled on foot, dropping some of the cigarette packs on the ground outside the store. Authorities were unable to locate the suspect at the time and have released an initial image from the scene (viewable in the image box). They expect to have more images shortly available.

This is the latest in a string of late-night convenience store burglaries in the Valley Springs area that have occurred in recent months. All have involved suspects shattering glass panes while shrouded in hoodies; primarily targeting tobacco products in their take.

The suspect in this incident is described as being a white adult male in his late teens or early 20s; between five-feet eight inches and five-feet ten inches tall and approximately 150 to 175 pounds. He was wearing dark shoes, blue jeans, a dark-colored hat and black hooded jacket.

Anyone who might have information about the case and/or who might be able to identify the suspect is asked to call dispatch at 209 754-6500 or the anonymous tip line at 754-6030.