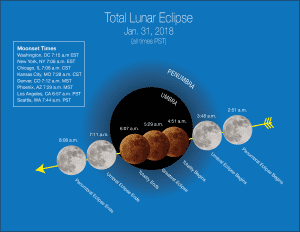 Sonora, CA — The Mother Lode will have a fully visible view of one of this year’s major sky events in the early hours tomorrow: a Super Blue Blood Moon lunar eclipse.

It is being called that because this full –- or blood — eclipse will be happening very close to Earth while also being the second full moon within a month; hence the extra adjectives super and blue. Experts say to stake out a spot with a clear, unobstructed view of the western night sky.

Locally, the eclipse will last for quite awhile — four hours and 21 minutes — beginning at 2:51 a.m. local time. At that time the Earth’s penumbra –- the lighter outer part of the shadow — will start to touch the Moon’s face. By 3:48, as the moon begins a partial eclipse, it will start getting red. By the time the total eclipse begins at 4:51 the moon will become, as it does during total lunar eclipses, completely red.

At 5:29 a.m. the phase will reach maximum eclipse 1.32 umbral magnitude with the moon coming closest to the center of the shadow. According to astronomers, a total lunar eclipse always has a magnitude greater than 1 and the measurement refers to the fraction of the moon’s diameter that is covered by the Earth’s umbra – or darkest shadow — at the distance of the greatest eclipse.

The total eclipse, which will wind up at 6:07, will continue through its final partial eclipse stage at 7:11 with the moon near the horizon and preparing to leave our view as it sets.