Hundreds Of Pills Seized In Raid 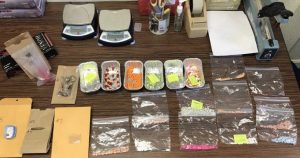 Sonora, CA – A second raid at a Sonora property uncovers hundreds of pills and lands a man, already on bail accused of attempting to smuggle drugs into Tuolumne County Jail, back behind bars.

This is arrest number two for Ramirez at this address. As reported here, it was the scene of a drug bust back in June when sheriff’s officials say he ran from the property but was easily detected due to an ankle monitor he was wearing and arrested at a nearby shopping center.

In regards to this latest arrest, Ramirez faces several more felony charges including drug sales, maintaining a drug house and committing a felony while out on bail.