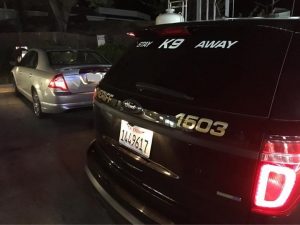 Sonora, CA — An alleged drug dealer and accomplice were busted over the weekend.

The Tuolumne County Sheriff’s Office reports that a deputy happened to be in the parking lot of the AM/PM mini-mart on Pesce Way in Sonora shortly before midnight on Saturday when 21-year-old Xavier Benzel arrived driving a silver Ford Fusion. The deputy knew that Benzel had a warrant for his arrest, so the vehicle was pulled over when it exited.

The K9 Maverick was soon deployed, and the dog alerted the sheriff’s office to the presence of narcotics. A search was conducted, and 6.5 grams of cocaine were found packaged in three separate bags, as well as a digital scale, packaging materials and just under $500 in cash. Benzel was arrested and booked into Tuolumne County Jail, as well as his lone passenger, 18-year-old Taylor Morse of San Andreas.

Benzel was booked for driving on a suspended license, transportation and possession of a controlled substance for sale, concealing evidence, and for his arrest warrant.

Morse was booked for possession of a controlled substance and concealing evidence.