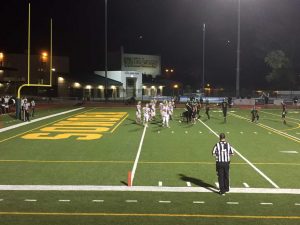 Sonora vs. Calaveras at Dunlavey Field

Sonora, CA — It was an offensive shoot out from the opening drive at Dunlavy Field Friday night as the Wildcats continued their winning ways with a 59-50 victory over Calaveras High.

On the first offensive possession after taking the kick off, Sonora’s Jacob Gookin took the ball 53 yards to open the scoring 7-0. After receiving the kick off, Calaveras used some trickery completing a reverse pass for a 60 yard touchdown on their first possession, tying the ball game. The Wildcats put together a grinding drive that culminated in a bruising one yard run by Jack Camara closing out the first quarter scoring with Sonora up 14-7.

Calaveras special teams pitched in opening the second quarter scoring with a 24 yard field goal closing the lead to within four points, 14-10. Calaveras scored again on an 80 plus yard drive taking the lead for the first time in the game, 14-17. The Wildcats’ Rico Sanchez answered back with a 22 yard rush into the end zone. Sonora missed the extra point, but still regained the lead, 20-17. At the close of the half, Camara continued smashing defenders and took it 12 yards to the end zone where C.J. Castleman punched in the two point conversion and the Cats were up 28-17 going into halftime.

The second half started with more fireworks as Calaveras opened the scoring with a two yard touchdown rush. Jack Camara went 43 yards for six points on a beautiful set up and perfectly timed call. He then completed a two point conversation, adding eight points to the total, with the scoreboard reading 36-23 with the Wildcats on top. The teams traded scores again as this time Calaveras scored on a seven yard touchdown and converted the extra point to close the gap to 36-30.

As this week was a bye for Summerville and Calaveras always brings a large contingent of fans wherever they travel, the large crowd was not disappointed by the onslaught of scoring that occurred in the fourth quarter of the Mother Lode League opener.

Sonora struck first with C.J. Castleman getting to the outside and turning on the after burners going 52 yards up the sideline. Camara punched it in for 2 points and the score was Sonora 44, Calaveras 30. On the ensuing kickoff, Calaveras returned it 80 yards and converted the extra point making it a one score game for Calaveras as they trailed 44-37. That deficit would not last long as Calaveras scored again on a 52 yard run and the game was all tied up mid-way through the fourth quarter. Castleman put the Wildcats up 52-44 after a 28 yard rush and a Camara two point conversion. Camara would score again from six yards out and Bryan Wynne nailed the point after bringing the score to 59-44. Calaveras never gave up as they made it to the end zone on a 50 yard pass, but the two point conversion failed and the score was 59-50. The onside kick failed, but the game was not over. The Cats needed one more first down which they were able to convert on third down. Sonora was able to kneel on the ball to close out the game and seal a victory, continuing their winning streak, 59-50.

Next week the Wildcats travel to Amador. The undefeated Summerville High School Bears had a well-deserved bye week. Next Friday they will be at home against Linden.

Bret Harte High School fell to 1-3 after losing to Argonaut at home 35 to 14. The Bullfrogs will take on Winters High School next Friday. Argonaut moves on to play Calaveras on its home turf.